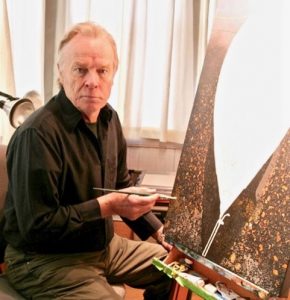 It is with a heavy heart that I pass on the news that Peter Gough has passed away.  Peter was recently the first recipient of the SCA President’s Award in honour of his many contributions to our society.

Peter Gough was elected to the Board of Directors of the Society of Canadian Artist, SCA, in 2012.  When I was the president, Peter Gough was our vice-president and served in that capacity for three years. Gough was a director for the maximum allowed 6 consecutive years.  After two years he re-joined the board as our Fundraiser and Sponsorship Director.  In this capacity, he just recently found a donor for the Mary Pratt Crystal Award for the next five years.

In his first year on the board Gough helped Andrea Pottyondy, who was then our Atlantic Rep., to organize the SCA exhibition in Halifax.  What impresses me the most about Gough is his generosity to other artists.  He is always working to promote the SCA in Canada.  It was through Gough’s efforts that the Right Honourable David Johnston, then Governor General of Canada, became the SCA Patron on April 2, 2013.  Peter believed that David Johnston’s message of service to others was something even artists needed to embrace.  Peter wrote many emails over the past two years and was successful in having our current Governor General, Julie Payette, continue in this role.

In 2012 Gough invited Mary Pratt to become an Honorary Member of the SCA.  When Mary Pratt’s 50 year Retrospective Exhibit opened at The Rooms in St. John’s, Gough and I travelled to the Opening to present a letter of congratulations to Mary.  Mary Pratt invited her friend Peter and me to tea in her home the next day, a memory I will always cherish. Gough then began working with Mary Pratt to establish the Annual Mary Pratt Crystal Award, created in recognition of this renowned Newfoundland and Labrador artist’s life work and career, as well as her dedication to the Arts Community in Canada. The Award, intended to inspire other artists, is organized and administered by The Society of Canadian Artists and is open to all fine artists in Canada and in any category. It was first presented in 2014 at the Society of Canadian Artists Open International Juried Exhibition and Competition. It alternates annually between the Open International and the Elected Members Exhibition. Until her passing Mary Pratt chose the winning painting.  Gough has asked Mary Pratt’s son, artist photographer Ned Pratt, and daughter, artist Barbie Pratt, to choose the winner this and subsequent years.

It was through Gough’s efforts that Andrew Hunter, when he was the Fredrik S. Eaton Curator of Canadian Art at the Art Gallery of Ontario, came to be the guest speaker at the Annual General Meeting of the SCA in 2014.

Gough began to question why we do not have a Visual Artist Laureate in Canada similar to the National Poet Laureate. This is when Gough formulated the framework for a National Visual Artist Laureate, and put forth a proposal which included having the SCA as part of the jury to choose the Artist Laureate.   Peter was encouraged by Geoff Regan to take his idea to the Honourable Wilfred Moore with hope that he would sponsor this bill in the Senate of Canada.  Gough’s intent and belief was that because of the importance the arts and artists contribute to the very being and spirit of this country there was a need for an Artist Laureate similar to the position of the Poet Laureate, a Champion that would be able to articulate the many issues facing Canadians and Canada and to inform Canadians about the value and importance that the arts bring to their lives both, economically and spiritually. When Wilfred Moore retired from the Senate, Gough then worked with Hon. Senator Patricia Bovey on Bill S-234 National Parliamentary Visual Artist Laureate.  In 2017 Gough invited Senator Bovey to speak at the annual SCA AGM about the Bill. The Bill was passed in the Senate in May 2018, but it did not secure a sponsor in the House of Commons. MP Dan Vandal intended to be the sponsor, but he was unable to do this after becoming parliamentary secretary. Before a sponsor could be confirmed, MP Marjolaine Boutin-Sweet proposed a unanimous consent motion to pass the bill at all stages; in an effort to fast-track what she believed to be an uncontroversial bill.  Unfortunately, the bill did not reach unanimous consent, and the whole approval process must now start over again.  Gough sent individual letters to every MP. Gough worked with Carfac National, with the SCA and other arts societies in Canada such as the OSA, RCA, and Aird Gallery, to see if the bill could be resurrected before the House rose in June of 2019.  He was not successful but undaunted Peter continued to work with Senator Bovey and the Bill is again being presented.

In 2018, Gough also proposed to the Ministers of Culture and Heritage in both Nova Scotia and New Brunswick the idea of Provincial Artist Laureates. These proposals are still under consideration.
Three years ago on Remembrance Day Gough watched the CBC telecast of the Ceremony in Ottawa and, as he was always thinking of ways to promote the arts, envisioned a wreath to honour Canada’s war artists such as Lawren Harris and Alex Colville.  Gough contacted Kelly Therien of the Canadian Legion. The SCA tradition began on November 11, 2019 when Gordon Harrison of the SCA, on behalf of all artists in Canada, laid that wreath at the National War Memorial in Ottawa.  The wreath was part of the ceremony in Ottawa again this year.
Peter Gough was a very successful Canadian Artist.  Of his art Gough said, “My goal as an artist has not been to merely create a likeness of the landscape. Rather I am looking for a dimension, a personality, a mood that resides in each of the places that I paint.  And I hope my work encourages the viewer to give serious thought to humanity’s relationship to our natural surroundings – our need to respect and revere nature.” Gough’s paintings are parts of many corporate collections in Atlantic Canada, in Scotland, England, Switzerland and the US.
In his fight for an Artist Laureate for Canada, Gough wrote, “It is my belief that the arts contribute to our spirit, our insight and our self-comprehension as a people and as Canadians.” I greatly admire Peter Gough’s vision of Canada, his constant generosity and perseverance to promote the SCA.  He was a good friend.