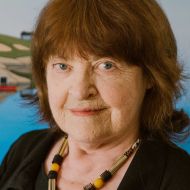 Elizabeth Evans
http://www.eaevans.com
Elizabeth is a formally trained visual artist who works in acrylics on canvas.
This user account status is Approved
About About
Photos Photos

About Me
Elizabeth
Evans
Gibsons
BC
Canada
Find My Work Online
http://www.eaevans.com
Facebook
Instagram
Biographical Info
Elizabeth is a formally trained visual artist who works in acrylics on canvas.

She enrolled at the Montreal Museum of Fine Arts in 1962 where she studied painting, drawing, sculpture, etching and design. She was taught and mentored by Arthur Lismer, a founder of Canada’s “Group of Seven” His influence is seen in many of her paintings especially the Brickilsim style she developed.

Her professional art career was launched in 1964 when she exhibited work at Gallerie Gauvreau on Sherbrooke St. in Montreal, a short distance from the Museum where she learned her craft. She has been a full time working artist for over 50 years and exhibited her work in numerous commercial and public galleries.  She's been featured in many art and general publications and featured in the TV program Artist in the House.

In 1992 her family moved to North Vancouver, BC from Ottawa and Elizabeth began exhibiting her work at Graham Sayelle Gallery in Vancouver.

In 2009 Elizabeth moved to the Sunshine Coast of British Columbia where she currently resides and continues to paint. She's passionate about capturing special moments - of nature, of children and of amazing breathtaking landscapes and seascapes.

Her work is currently exhibited at One Flower One Leaf Gallery in Gibsons, BC and Koyman Galleries in Ottawa, Ontario.  Her work can also be viewed on her website at www.eaevans.com